Dr Jumana Bayeh is a Senior Lecturer in the Department of Modern History, Politics and International Relations, whose research spotlights the essential role of fiction in telling the truths of the experiences of the Arab diaspora. 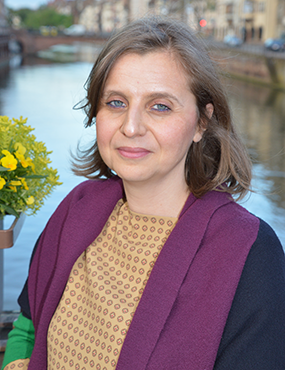 My area of research focuses on Arab migrant writers and literature. I studied Middle East politics which I thoroughly enjoyed, but being a committed reader from a young age, alongside the political texts I was being asked to read for my university studies, I also read a lot of fiction by writers I identified with. These writers were Arab migrants, or from Arab migrant backgrounds, living in places like Australia, North America and the UK. What became clear to me was that I was learning about the Middle East and its diaspora from these works of fiction, in fundamentally different but no less valid ways than the more political texts I was reading.

In almost every undergraduate course, the work of Edward W. Said was required reading. Said's Orientalism, which unpacked how Western writers in the 18th and 19th centuries represented the Middle East seemed to really validate the importance of literature both for the way we view the world and how literature gives us the opportunity to imagine different worlds. That imagining afforded by literature was rather formative for me and explains why I am interested in this particular area of research.

Since I started research on diaspora writing – my PhD and first book looked at Lebanese diaspora fiction – this field has nothing but proliferated, expanding in new and interesting directions in recent years. There is now a sub-field in Middle East studies called Middle East migration studies being spearheaded in the US. I have been fortunate to be part of that discussion unfolding in America through my work. Most importantly, the fiction of Arab diaspora writers, which reaches back to 1911, is rapidly growing – here and globally. I cannot keep up with what is being published. With the help of my brilliant research assistant Dr Elizabeth King, I now have a database of every Arab diaspora title we could find and it contains over 350 works. Most of those were published in the last 30 or 40 years. This is exciting for a researcher and helps to maintain my interest as I get to observe how this fiction is evolving.

Why is your research important?

One of the theoretical fields I work in is diaspora studies, which intersects with postcolonial studies. Diaspora is invested in studying mobility, in particular the movement of peoples but also the ideas, stories, and other objects they carry with them. What diaspora does, and what makes it important, is that it gives us a lens in which to comprehend the world as unsettled, restless and unbounded, against the primary way we tend to view it as a series of states with discrete national histories. Rather than see world as divided, diaspora research assumes interactions between cultures and peoples, encounters across civilisational divides, and interconnections between places and what we today call nation-states.

In my extensive reading of Arab diaspora fiction, I can say that a central ambition of this corpus has been to highlight just how intertwined the East and West are, how intimate and familiar rather than distant and foreign the peoples, ideas and values across the divide of the Middle East and West are. I think it is profoundly important to stress this in this era of Islamophobia and Arabophobia. Obviously, I am focused on diaspora in relation to the Arab region but it can and is applied elsewhere.

What would people be surprised to know about you or your work?

One thing that seems to continually surprise people is that I teach in a Department of Modern History, Politics and International Relations (though I have also taught in the Department of English). The reason for this surprise is that my research deals with literature, though it is also heavily determined by political ideas and concepts. Currently, I am working on projects that look at the nation-state or riots in literature, two things that have preoccupied politics scholars as well as literary critics. My approach to building knowledge about the Middle East is unorthodox if people assume, as I think most do, that Middle East studies is the domain of politics and international relations. However, other disciplinary approaches have sound contributions to make about this region not just from literature and cultural production, but also feminist theory, gender studies more broadly and critical cultural studies, to name only a few.

What work of Arab Australian literature should everyone read and why?

This is such a tough question. I’m going to cheat and nominate two! Michael Mohammad Ahmad’s first novel The Tribe is a gem. It is part of a trilogy that traces the life of Bani Adam. In The Tribe we meet Bani as a young school boy, dwelling mainly in the safe confines of his labyrinthian family home with his extended family. The story is wonderful, but what makes this novel special and worthy of being read is Ahmad’s controlled, concise but no less beautiful prose. It is a short novel – you could call it a novella – but due to the author’s writing style it packs in so much. The other writer I’d like to recommend is Paula Abood. She’s written some creative non-fiction and works for the stage. Her Stories from the Diaspora is a wonderful series of female-centred stories.

What is on your agenda for the remainder of 2020?

I’ve started working on my next book which looks at Arab diaspora fiction and the idea of the nation-state. I’m part way through the introduction and want to finish it so I can start drafting the next chapter. I am also working in a team, lead by Professor Helen Groth (UNSW) and with Professor Julian Murphet (Adelaide), on an ARC Discovery project, “Rioting and the Literary Archive”. For this project I am covering riots and uprisings in the Arab Middle East, as well as looking at the Cronulla Riots. As a team we are just about to start work on an edited collection addressing global riots which I’m excited about, even if it is certain to keep me busy. In terms of teaching, we are delivering our classes online currently. This may continue into semester 2, and if so I’ll be refining my online teaching skills to manage my large undergraduate courses.

What’s your proudest achievement at Macquarie?

I teach Middle East politics and have done so for about 5 years. Over these years my courses have increased significantly in student numbers, which is great but with it comes the challenge of conveying information to a diverse range of students. The region I teach about is a contentious one. Students never come to a Middle East class knowing nothing about the region – quite the opposite in fact. Given its topicality the Middle East is always in the media. Often students come feeling overwhelmed with information that is decontextualized and has little historical grounding. Through no fault of their own, many are misinformed. My task is to redress those feelings of overwhelm and to chip away at the misinformation.  To do this I begin my courses by building context and framing history that is relevant to the Middle East. This means that the first 3-4 weeks of my courses start with a lot of history and theory. Students often find this a challenge and do complain, but I persist despite their grumblings. My proudest achievement is when students confess that those preliminary weeks were crucial to providing them with the critical skills to better make sense of the region, in the classroom and beyond.

Outside your own, what area of work or research in the Faculty of Arts inspires or intrigues you?

I helped set up and co-lead, with Associate Professor Ulrike Garde and Dr Alex Kurmann, the Global Literatures and Cultures research cluster. I am also a member of the History of Emotions research group. Through the events hosted by these clusters, I get to hear about all sorts of different areas of research which is inspiring in terms of how the idea of ‘the global’ resonates differently depending on one’s area of work. Someone studying film, or a historian, or a sociologist, or a scholar in music arrives at issues of globality in ways I have not considered, which helps me constantly rethink my own ideas around this concept and unsettles my own assumptions about ideas like ‘global’ and ‘diaspora’. While this can be unnerving, I am also thankful as it pushes me to look at research I had not heard of nor given much thought.