He hasFor nearly 15 years until 2006 Simon George worked as a petroleum geochemist at CSIRO. He has continuing interests in this area, especially in the accumulation and fate of oil in reservoirs, and the behaviour of gas in coal seams. Several of the students in the organic geochemistry group are doing related projects. This group of projects are often collaborative with colleagues at CSIRO Energy.

Deconvolution of the UCM

Petroleum biodegradation is the alteration of crude oil by living organisms. It is an essential hydrocarbon oxidation process for recycling nutrients in the biosphere. For in-situ anaerobic petroleum biodegradation to happen properly, conditions are required which support microbial life like sufficient access to petroleum, and the availability of other nutrients. The Gippsland Basin, located on the south-eastern coast of Australia, is one of Australia’s premier oil provinces, and many of the fields in the basin show strong evidence of in-situ crude oil biodegradation. A prominent hallmark of biodegradation is an increase in the ‘unresolved complex mixture’ (UCM) component of the oil, which is too complex to be resolved by traditional capillary gas chromatography. Because the constituents of UCMs are not GC amendable and hence unknown, this repository of geochemical information cannot be accessed with conventional GC methods. Gas chromatograms of saturated and unsaturated hydrocarbons extracted from crude oil samples from the basin contain UCMs of different extent related to the intensity and retention time of the compounds comprising the mixtures. Comprehensive two-dimensional gas chromatography time-of-flight mass spectrometry (GC×GCToF- MS) has an increased resolution, and therefore the potential to separate thousands of previously unidentified compounds. 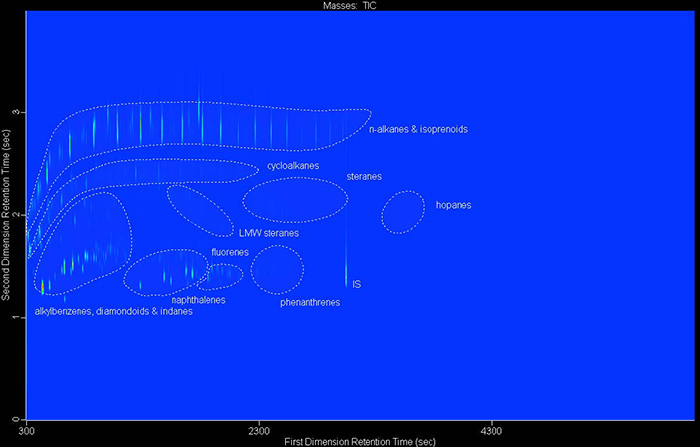 Use of oil inclusions to define early oil generations

Petroleum-bearing fluid inclusions are small encapsulations of oil and gas that offer an invaluable opportunity to better constrain the evolution of petroleum systems. Insights into palaeo fluid compositions complement observations on present day fluid compositions, which represent only the end-point of complex cumulative processes throughout basin history. The abundance, distribution and composition of oil inclusions can be used to provide clearer data on the extent of palaeo-oil columns, and the composition of that palaeo-oil.

For example, analysis of the FI oil confirms a more marine-influenced source facies of the palaeo-oil, with the Echuca Shoals Formation being the most likely source based on oil-oil and oil-source correlations. The FI oil appears to represent a marine source end-member.

Simon George has published many papers on this topic, and the work continues in various forms, including with collaborators in China.

We are working on lacustrine and terrigenous source rocks in Australia (Gippsland Basin) and China (Dongying Depression; Chaoyang Basin; Songliao Basin; and several others). Coal seam gas (CSG) consists primarily of methane and carbon dioxide, which are generated via thermogenic and/or biogenic processes. Thermogenically, CSG is produced from the cracking of complex hydrocarbons under increasing pressure and temperature, and biogenically, as the end-product of microbial metabolic pathways. The mechanisms of in situ biodegradation of organic compounds in coal are not yet well understood. More labile and reactive compounds likely include low molecular weight n-alkane and aromatic hydrocarbons. This study aims to identify and understand geochemical and microbial community changes that occur during the biogenic conversion of coal to methane.