The Molecular and Optical Physics Laboratory (MOPL) provides an excellent setting for laser-based research in optical or molecular physics, with various interesting projects either underway or contemplated in the near future. Previous Honours and PhD graduates from MOPL have found employment in the photonics industry and in R&D institutions (universities, CSIRO, DSTO, …) in Australia, Europe and the USA.

Some of MOPL's recent work has been slanted towards possible commercial or industrial uptake of new laser-based instruments and sensing techniques that have been developed. Several items of our laser-based intellectual property have been through the preliminary stages of commercialisation.

Some specific examples of MOPL’s recent and ongoing research project areas are illustrated below, under the following headings.

In cavity ringdown (CRD) spectroscopy, tunable coherent light (e.g., from a laser) interacts efficiently with gas-phase molecules in a highly reflective resonant optical cavity. Tuned coherent radiation bounces back and forth in the cavity, travelling many kilometres. Weak absorption spectra (e.g., at low molecular concentration) are then measurable with high sensitivity and photometric precision. The rate at which light 'leaks' out of the cavity is readily converted to an absorption spectrum. The conventional form of CRD spectroscopy employs pulsed coherent light, but new ways to use continuous-wave (cw) sources have been developed. Research on CRD spectroscopy within MOPL has led to compact CRD spectrometer designs based on a rapidly-swept optical cavity, miniature tunable diode lasers, fibre optics, and other optical telecommunications components.

Key features of the MOPL innovations, such as optical-heterodyne detection, allow the optical transmitter and receiver to be located in a single module that is linked to one or more CRD cavities by optical fibres for environmental gas sensing over long distances (up to tens of km). Our recent work in this area has focused on environmental and agricultural applications within the CSIRO Livestock Methane Research Cluster, aiming to remotely monitor atmospheric emissions of methane (a greenhouse gas) from cattle and ammonia (a key source of nitrogen) from fertilised soil and animal wastes. Illustrations concerning this work are shown below. Various specially engineered solid-state materials (identified by acronyms such as BBO, PPKTP, PPLN, OP GaAs, etc.) with nonlinear-optical coefficient χ(2) can then be placed inside a laser-like optical cavity to optimise the OPO’s optical conversion efficiency and output power.

Signal and idler output from a simple free-running OPO (with no wavelength control elements) tends to be broadband (with a relatively wide spread of output frequencies ωS and ωI).

To generate narrower optical bandwidths and to control the output frequencies ωS and ωI precisely, optical tuning elements (e.g., étalons and/or gratings) are often inserted into the OPO cavity. However, this introduces losses in the cavity which tend to invite damage to the nonlinear-optical crystal as the threshold for oscillation of the OPO approaches that for optical damage.

Much of the developmental work on OPOs at MOPL has focused on injection seeding (by an external narrowband tunable laser) of an OPO cavity. Such an approach is advantageous because it is modular (with the OPO oscillation/amplification stage separated from the wavelength-control stage). We have shown that wavelength control by injection seeding is readily applicable to OPOs with pulse widths of ~10 ns.

We have demonstrated a simple OPO design, in which a passive multi-mode optical cavity is simultaneously injection-seeded at more than one seed frequency ωS or ωI. This is useful for multi-wavelength spectroscopic sensing, as in the case of dual-line spectral OPO CARS (coherent anti-Stokes Raman scattering) thermometry of nitrogen in furnace air illustrated below – an example of so-called "spectroscopic tailoring" of an OPO.

For example, we have used a tunable OPO-based spectroscopic source of coherent, narrowband, deep-UV light in ionisation-detected, two-photon excitation studies of atomic xenon (Xe) in high-energy Rydberg levels; we have resolved and characterised isotope energy shifts and hyperfine structure in this region for the first time (see below). Ongoing work in this area has implemented a time-of-flight mass-selective detection system to discriminate individual Xe isotopes and thereby further resolve spectroscopic details. 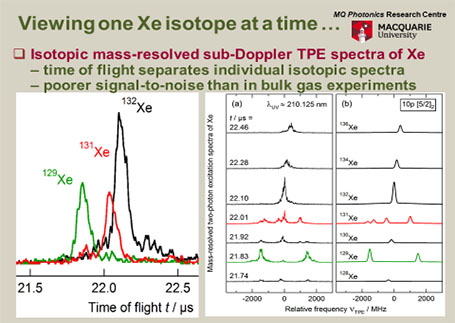 The MOPL research group has a long history of advanced experiments that use high-performance pulsed lasers to prepare a small molecule in a specific, well-characterised quantum state and then (after a controlled delay period Δt during which gas-phase collisions can occur) to probe (e.g., by means of laser-induced fluorescence, LIF) the distribution of final-state populations that occur. Such approaches have several advantages:

Much early progress in this area was made by the MOPL research group by using particular fixed infrared (IR) output wavelengths of a pulsed, line-tunable carbon dioxide (CO2) laser to prepare specific rovibrational (rotational-vibrational) quantum states of the gas-phase formaldehyde-d2 (D2CO) molecule. After a controlled delay period Δt (during which gas-phase collisions can occur), tunable ultraviolet (UV) light from a pulsed dye laser is then used to excite UV laser-induced fluorescence (LIF) and thereby probe the collision-induced distribution of final rovibrational-state populations. This time-resolved IR-UV DR approach has attained several goals (as illustrated below): 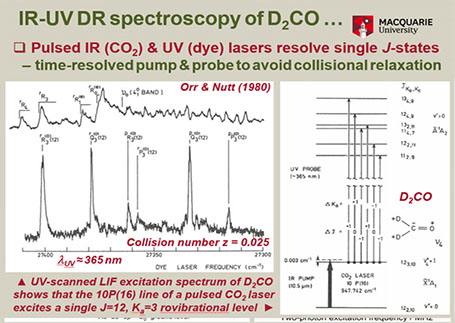 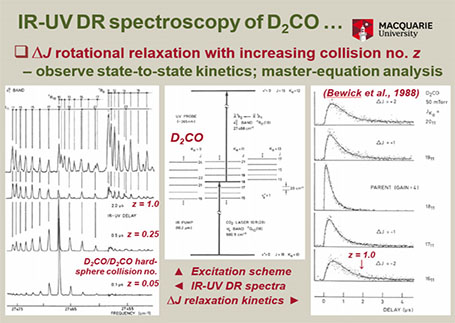 Relevant review articles and research papers: Note that these refs are re-arranged. 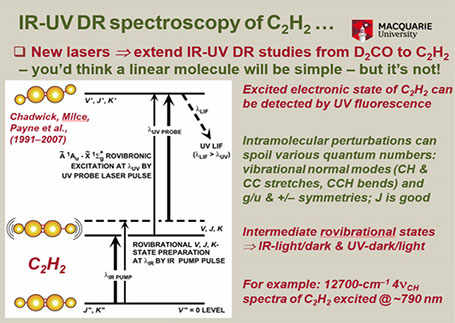 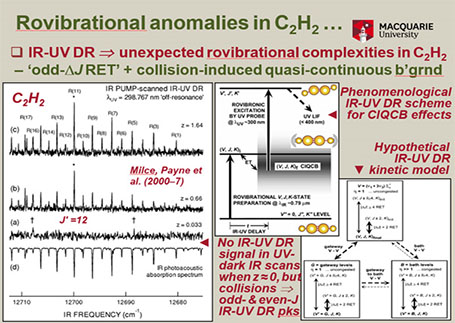 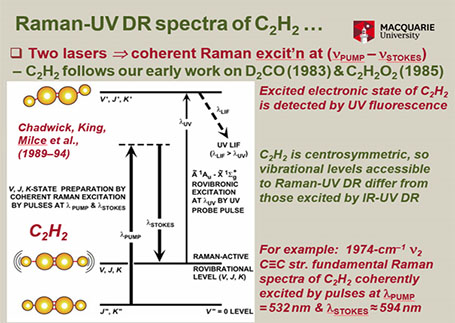 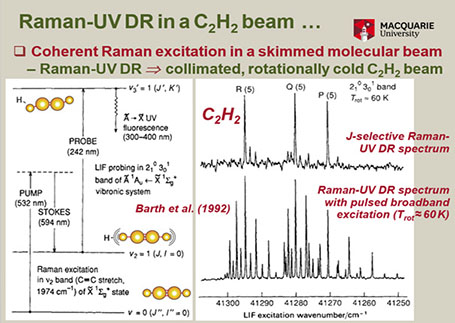 Optical fibres have been widely used within the MOPL research group for transmission of coherent light over long distances (e.g., in our CRDS work – see above). In a collaborative ARC-funded Linkage Project, we have developed new methods for high-fidelity long-distance transfer of a discrete radio-frequency (RF) or optical frequency over optical fibres, with particular reference to the needs of radioastronomy and metrology. Our RF-over-fibre technique, illustrated below, comprises a phase-conjugate photonic scheme for high-fidelity RF-over-fibre frequency transfer that has promising applications as a cost-effective way to control VLBI (very large baseline interferometry) arrays of radio-telescopes. Our most significant results (recently published) were obtained over a two-way distance of ~310 km at the CSIRO’s ATNF (Australia Telescope National Facility) spanning the Narrabri and Mopra areas of northern NSW. They demonstrate operation of VLBI arrays with fewer expensive hydrogen-maser frequency references. This has been reported by OSA’s Optics and Photonics News: “A team of scientists in Australia has now demonstrated an approach for reliably transmitting such a frequency reference across hundreds of kilometers of installed, standard telecom fiber – even when the fiber is simultaneously transmitting live telecom traffic.” 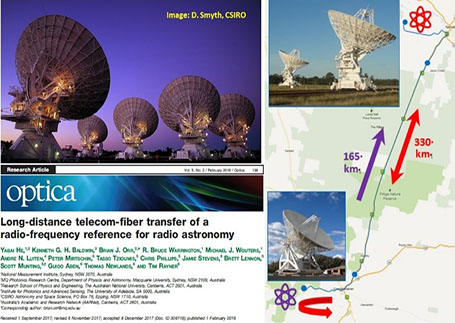