Israel and Judah in the Ancient Levant, including:

The Ancient Levant as a strategic geopolitical location

The mountain ranges and the stark deserts which surround the Levant would have been difficult, or at times impossible to travel across with ancient technology. The easiest routes for travelling between the major cities of Africa and Asia were the valleys and plains  through Ancient Israel. For more information on the trade routes, see this in-depth and mapped guide by Bible Gateway. The Levant was also a major hub for sea trade between the Greek islands, who would use the vast coast as a point of contact with Egypt and Mesopotamia. The coast of Israel was a gateway for the transportation of goods to and from Greece, Egypt and Arabia to Anatolia and Mesopotamia. For this reason, the land of Israel was used as a central place of trade by many surrounding civilizations.

However, because it possessed such thriving trade routes and resources the area often gained the attention of the surrounding regional superpowers. Empires fought to control the region and the wealth of the trade that moved through it. Ancient Israel hosted many confrontations between the powerful empires surrounding it, such as those between the Egyptians, the Hittites and Assyria. The inhabitants of Ancient Israel were dominated, more often than not, by these great powers.

The People of the Ancient Levant:

For more information on these cultures, we have prepared this powerpoint for use in your classroom.

As well as becoming a center for cultural trade, the mountainous terrain which surrounds Israel directs water into the valleys below the ranges. This nurtures the earth, making it fertile and ideal for agriculture. This fertility has allowed many cultures to form and thrive in this region throughout thousands of years.

The major civilizations of Mesopotamia, Egypt, and Anatolia who all had previously fought for rule over Ancient Canaan suffered a large cultural collapse between the Late Bronze (1550-1200 BC) and Iron Age I (1200-1000 BC). Alongside this, the Egyptians were forced to defend their homeland from an influx of people migrating from the west into the Levant. This mysterious decline is known as the ‘Late Bronze Age Collapse’. The exact cause of the widespread collapse remains a debated mystery (natural disaster, invasions, climate change, etc.), but it likely stemmed from multiple causes.

When new settlements arose from the ruins of the collapse in the Levant (the center of these falling civilizations) they were smaller and less populated, and lacked the central administration of Late Bronze Age cities. Many small settlements and tribal kingdoms began to appear throughout the highlands. The Stele of Merneptah records the earliest surviving mention of The Israelites within this period. Edom, Ammon and Moab also arose in the east.

By approx. 1100BC, the land of Canaan was divided. The Philistines lived along the southern coast. The Canaanites remained within the inland valleys and the central and northern coastal areas. The Israelites and other states including the Ammonites, Moabites, and Edomites lived within the ‘highlands’. For more information on these cultures, we have prepared this succinct powerpoint for use in your classroom.

The reign of Solomon and the building of the First Temple

The rule of King Saul initiated the period known as the ‘United Monarchy’. This is the period of the rule over all the Israelite people and tribes within the reign of King Saul, David and Solomon. In archaeological studies, the time period of this monarchy is debated, though traditionally it is dated between 1050 BC and 930 BC.

King Solomon succeeded his father, King David, commencing what has been termed the ‘Golden Age’ of Israel. As a King, Solomon initiated many trade connections for Israel, including a strong relationship with the King of Tyre in Phoenicia. There were also many conflicts with neighboring settlements, such as the Philistines and Moab. The biblical account expresses that Israel economically flourished within this period.

Solomon is described in the bible as wise, and is also known for fortifying the cities of Israel, especially Hazor, Megiddo, Gezer and the wall of Jerusalem. This is stated in the biblical account:

''Here is the account of the forced labor King Solomon conscripted to build the Lord’s temple, his own palace, the terraces,[a] the wall of Jerusalem, and Hazor, Megiddo and Gezer. -1 Kings 9:15.''

Interestingly, within the archaeological record the sites of Megiddo, Hazor and Gezer all possess a similar wall structure and similar form of a six chambered gate. For this reason, this style of gate has become to be known as a ‘Solomonic Gate’.

The Temple of Solomon:

Click here to watch a video of the 3D recreation of the Temple.

As another of his building projects, Solomon also constructed a temple upon the ‘temple mount’ in Jerusalem, now known as the ‘First Temple’, dedicated to worship of the Israelite god. As this was built upon a sacred site which is used religiously today, little archaeological content has been uncovered of the First Temple. For this reason, the biblical account remains the main source of understanding the structure. The full biblical description of the temple can be read at the Bible Gateway website.

According to the biblical account, many of the materials for the temple were traded from Phoenicia and the temple itself was constructed by craftsmen from Tyre. The temple is described as being fashioned from un-hewn stone, which is covered by cedar beams. The style and layout of the temple is similar to temples of Phoenician design. Inside it contained the ‘Holy of Holies’, a room constructed to hold the Ark of the Covenant. The palace took 13 years to complete.

Division of the kingdoms of Israel and Judah under Rehoboam c. 931 BC

Despite the prosperous economy of Solomon's rule, the tribes of Israel begun to revolt from the monarchy. This began in the rule of David, and continued into the reign of Solomon's successor, Rehoboam. When Rehoboam refused to alleviate a heavy tax from the people, ten of the twelve tribes of Israel rebelled and crowned Jeroboam as their new king. Only two tribes, Judah and Benjamin, remained loyal to Rehoboam. This began the period of the 'Divided Monarchy' of Israel and Judah, the twelve tribes divided between King Rehoboam of Judah and King Jeroboam of Israel .

The division of the United Monarchy is accounted for in inscriptions where 'Northern Israel' (referred to as ‘the House of Omri') and Judea ('the House of David') are distinguished as separate kingdoms. The archaeological evidence shows that Northern Israel developed into a powerful state shortly after the period described within the Bible. However, archaeologists debate at what time the Southern Kingdom reached maturity. It has been suggested by scholars that in contrast to the image projected in the biblical account, the Southern Kingdom actually only rose in prominence after Northern Kingdom had been conquered by the Assyrians.

This argument has been disputed by Professor Yossi Garfinkel, the Co-Director of Macquarie University’s Khirbet El-Rai dig, who debates that the fortifications discovered at the sites of Khirbet el-Rai and Khirbet Qeiyafa show that the southern kingdom was already developed and influential in the First Temple Period. For more information on Khirbet el-Rai, check out this Virtual Site Study of the Dig! . 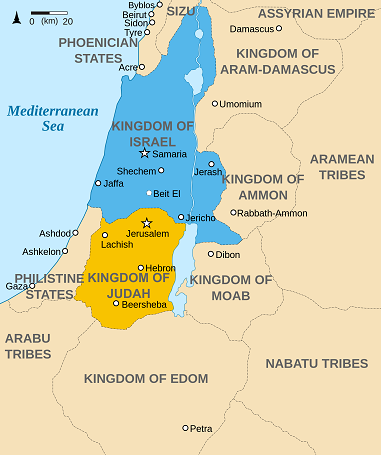 Sources for The Northern Kingdom of Israel:

The inscription below is found upon a Black Obelisk found in Nimrud, Assyria:

"The tribute of Jehu, son of Omri: I received from him silver, gold, a golden bowl, a golden vase with pointed bottom, golden tumblers, golden buckets, tin, a staff for a king [and] spears."

The name ‘Samaria’ used within inscriptions is likely another reference to northern Israel, because it became the capital of the northern kingdom beginning in King Omri’s reign.

Sources for the Southern Kingdom of Judah:

The Southern Kingdom of ‘Judea’ is first mentioned in a tablet from Nimrud, from the reign of Tiglath Pilester III. Whilst discussing his building accounts, he lists payments of kings from many foreign countries including Sanīpu of the land Bīt-Ammon, Salāmānu of the land Moab, Qauš-malaka of the land Edom and Jehoahaz of the land Judah. A full translation can be viewed at the University of Pennsylvania website.

The Tel Dan Inscription is a victory inscription by King Hazael of Haram Damascus. It is written in Aramaic, a language closely related to Hebrew. It mentions both the northern kingdom of Israel and the southern kingdom of Judea.

The Tel Dan inscription references ‘The House of David’, which is the biblical name for Judea, and the first mention of the name outside of the bible.

The boundaries of Judah and Israel expanded and extracted through the wars and conflicts of the two kingdoms over the years of their division. The archaeological account indicates that Israel was the more prosperous of the kingdoms until around 720 BCE, when it was invaded by Assyria the population was deported.The two cultures developed differing material cultures, such as the lmlk jar handle stamps of Judea.