The physical features of the ancient society and how they influenced the civilisation that developed there:

The chronology of ancient Egypt is both a modern and ancient construct which has been developed from a variety of sources. These sources include archaeological evidence, scientific data and surviving literary evidence such as annals and king lists. In the simplest sense the chronology of ancient Egypt can be divided into four key historical periods, each of varying lengths;

These historical periods can be further divided into ‘kingdoms’ and ‘dynasties.’ The term dynasty was developed by Manetho, an Egyptian Priest who lived during the early Ptolemaic Period and who wrote Aegyptiaca, a three-volume book on Egyptian history. It is from the extant fragments of Manetho’s work, that scholars have reconstructed the reigns of the Pharaohs of Egypt and have gained an understanding of the Egyptian king list tradition. Manetho divides Egyptian history into 30 dynasties (successions of rulers from the same family or same powerful group). The divisions made by Manetho align closely with the groupings of kings in other king lists which have been discovered, such as the Palmero Stone, the Turin Royal Canon and the Karnak King List. However, the use of the term ‘kingdoms’ to divide and group these dynasties is a modern construct. Modern scholars use the term 'Kingdom' to describe periods of Egyptian history when  the central government was strong, the country was unified under the control of one king and there was an orderly succession of kings. Periods of Egyptian history when the central government broke down, competing rulers or centres of power emerged and the country was in a state of civil unrest or was occupied by foreign powers are referred to by scholars as being 'Intermediate Periods'. The ancient Egyptian chronology is complex and there are many issues with the way it has been constructed. Many scholars even disagree about the basic division of historical periods. Furthermore, there are issues with the ancient sources from which our current chronology has been constructed, for example, Manetho’s and other similar king lists are fragmentary in nature and a number of inconsistencies and discrepancies exist between these ancient sources.

Egypt’s natural landscape, flora and fauna were important sources for the ancient Egyptian economy and inspired and shaped the religious beliefs, art and architecture of its people. Therefore, understanding Egypt’s unique environment and landscape is key to understanding its culture and its people. 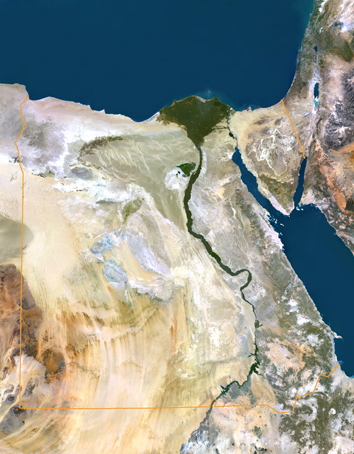 Egypt is located in the north-eastern corner of Africa and is today bounded by Libya to the west, Israel to the north-east and Sudan to the south. The Mediterranean Sea provides a natural boundary to the North of the country whilst the Gulf of Suez and the Red Sea form part of Egypt’s boundary to the east. The country has six main physical regions: the Nile Valley, the Nile Delta, the Western Desert, the Eastern Desert and the Sinai Peninsula.

Egypt has a very arid climate with the majority of the landscape being dominated by large deserts to the east and west of the Nile River with vegetation occurring only in the Nile Valley, the Nile Delta and pockets of desert Oases.

Egypt’s most important geographical feature is the Nile River. Its annual inundation and the fertile mud and silt it brought to the Nile Valley and Delta had the greatest impact on the ancient Egyptian people and the development of their culture. The Nile is the longest river on earth and is fed from two main tributaries, the Blue Nile and White Nile. These two rivers meet at Khartoum in Sudan and form one huge river which winds its way from the south of the country to north where it ends in the Nile Delta and flows into the Mediterranean Sea. The Nile divides Egypt into two main regions; Upper Egypt (Aswan – Cairo) and Lower Egypt (Nile Delta). These regions were further divided by the ancient Egyptian’s into Nomes (territorial divisions), 22 Nomes in Upper Egypt and 20 in Lower Egypt.