the significance of the site today:

Lake Mungo is a critically important site for ancient and modern Australian history. It is part of the Willandra Lakes World Heritage area and home to highly significant archaeological finds that have enabled scientists to date Aboriginal occupation in the region back to over 42,000 years ago. Its cultural significance for Aboriginal people cannot be overstated. It is a sacred site, and burial ground and many significant archaeological remains have been recovered due to Mungo's favourable conditions for the preservation of the archaeological record.

We have prepared two powerpoints ready for use in your classroom! You can use these over two lessons or combined into one. They cover the range of sources and the significance of the Willlandra Lakes region, including:

See below for more handy resources on Lake Mungo and the Willandra Lakes region.

A good introduction to the site of Lake Mungo can be found in this short and informative video clip from the UNESCO world heritage channel.

See also the Mungo National Park Website which discusses the natural environment of the Mungo National Park and Lake Mungo. This site includes links to clips and information about the geological forces that shaped the region, a timeline of significant climatic, environmental and human events that shaped the region, and some notes on the human historical experience.

Significance of the site today

Lake Mungo is an extremely significant site, both for its contribution to the study of the Ancient Australian past and for its continued cultural and spiritual significance to the traditional owners of the land.

See the UNESCO World Heritage Listing and especially the Willandra Lakes Conservation Report (under "Periodic Reporting Cycle 1") for a description of the site's world heritage and historical and cultural significance. It includes current threats and risks to the site and how these can be mitigated. See here for a pdf of the report.

For more information on the significance of the site and preservation of the footprints and burials, please see our two powerpoints above on (1) stone artefacts, middens and fireplaces and (2) burials and footprints and the accompanying Teacher's Notes.

The range of sources and their condition

One of the most significant archaeological finds at Lake Mungo, both for the study of Australian history and for studying the ancient past more broadly, is that of Mungo Lady. Mungo Lady is the remains of an 18-year-old girl found buried at Lake Mungo 40,000-42,000 years ago. See the National Museum of Australia's Website for some useful information on Mungo Lady and her significance for Australian history. See especially the Secrets of Lake Mungo video clip, which, although aimed at an upper-primary audience, contains useful information about the discovery of Mungo Lady, including Indigenous responses to the discovery.

The removal and display of Aboriginal remains is still a controversial issue today. These ancestral remains are extremely important culturally to the traditional owners of the Willandra Lakes region, the Ngiyampaa, the Mutthi Mutthi and the Paakantji peoples. The Australian Aboriginal people often suppress images of people who have passed away as a form of mourning and respect. Protocols for the use of images and names of individuals who have passed away vary between different cultural groups and liaison with the communities is required to determine an appropriate method for using these names and images. Out of sensitivity to the importance of these remains to the traditional owners and to the Australian Aboriginal people today, we have chosen not to include images of the remains of Mungo Lady and Mungo Man on this site.

For more information on these sources please see our two powerpoints above on (1) stone artefacts, middens and fireplaces and (2) burials and footprints as well as the accompanying Teacher's Notes. 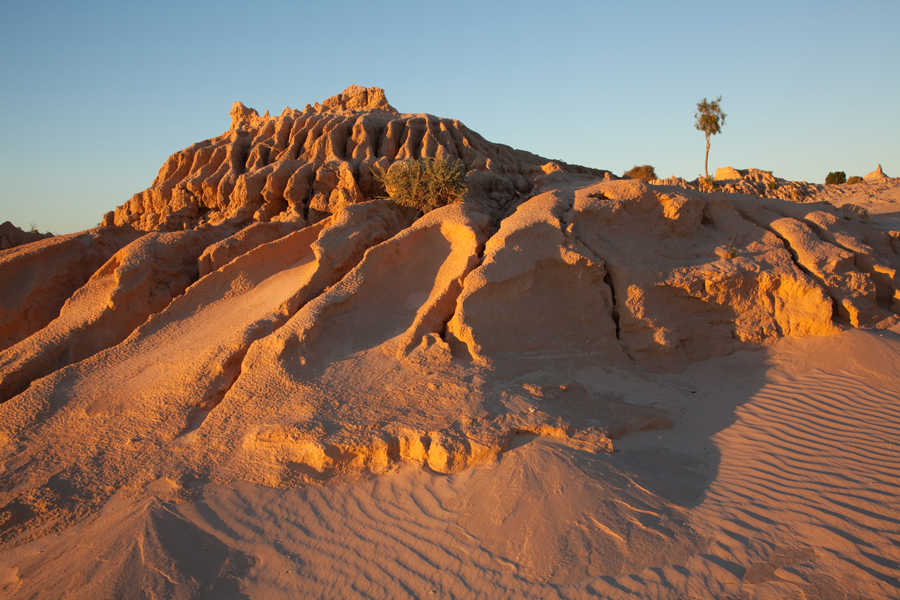 Erosion of the Lake Mungo lunette has formed the "Walls of China".