An introduction to ancient numismatics

Numismatics can be tricky. It's hard to know where to begin - the terminology and concepts are rather esoteric. Nonetheless, coins are hugely valuable for the study of ancient history. With this in mind, the following resource has been designed. It consolidates a number of essential concepts into one place so you have a point of reference as you begin to explore Greek and Roman coins.

Numismatists use a specific vocabulary to describe coins: 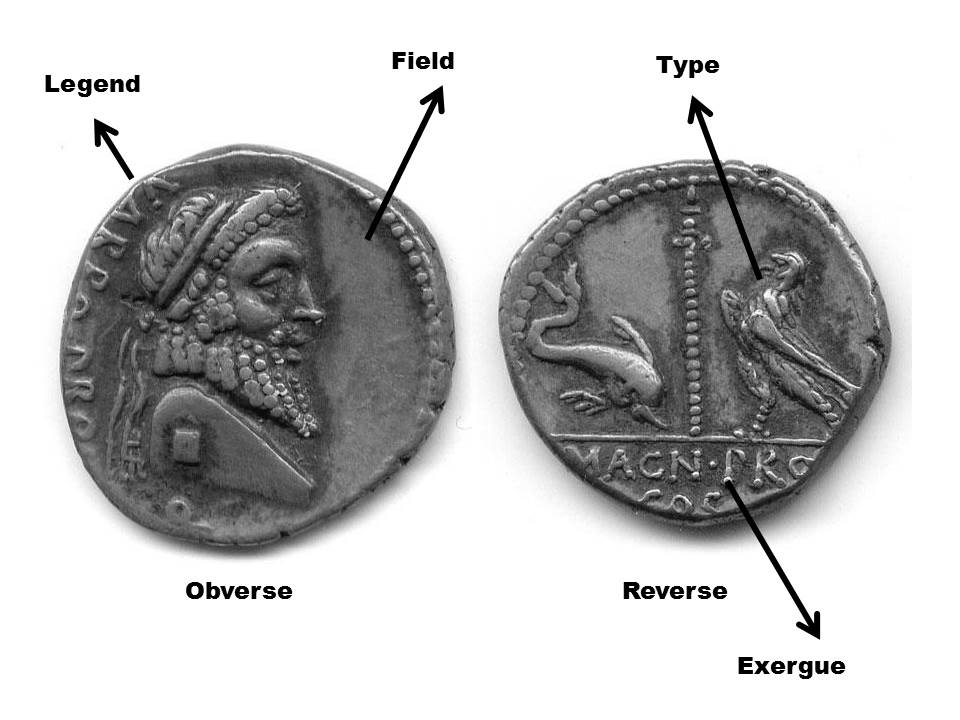 How to mint an ancient coin

The image on the left shows how an ancient coin was struck. The hammer strikes the reverse die, leaving an impression on the heretofore blank flan. As the flan is depressed into the obverse die, an impression is left on the other side of the flan. You would already be aware that coins, like any historical artefact, may be found on an archaeological site. Large quantities of coins are, however, found in uncontrolled circumstances. While a collection of coins buried together remains together, it is of extreme value for numismatists, and is often referred to for research purposes. Such collections can be found by amateur enthusiasts or dog walkers. They are referred to as hoards.

For practical purposes the minimum size for a hoard is just two coins and the qualifying factor which creates a hoard is that the coins should have been brought together in a deliberate manner. Of course, most hoards consist of more than two coins, but size alone is not an important qualification for a collection of coins to comprise a hoard.

Hoarding seems to be endemic and can be associated with every strata of society and with every sort of coin-using community. Within this wide spectrum, coin hoards consisting of what might properly be called treasures coexist with trivial sums of low denomination coins. But the value of these hoards to their original owners may, of course, have been in inverse proportion to their apparent intrinsic value: the loss of a fortune to a rich man may be nothing compared to the loss of the price of the next meal to a starving one. The images on this page show how one might find coin hoards. They can be in large or small hoards, buried in soft bags which have disintegrated over time, or clay pots. All the hoards pictured here contain Roman coins found in England - the images are from the Portable Antiquities Scheme, which catalogues all sorts of finds in England and Wales. 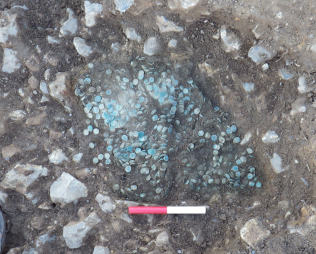 Nearly everyone has formed a hoard at some time or other. Maybe you don't know what to do with 5c pieces, so you keep them in a jar; perhaps you throw in some coins for every expletive you utter; maybe you're collecting for charity; maybe you just like collecting interesting coins. The ancients operated in exactly the same way. Not every hoard was buried as a form of 'savings' deposit, nor were they kept secret. Two of the most famous hoards were foundation deposits beneath the Apadana at Persepolis. There Darius the Great intentionally buried gold and silver coins as representations of the western boundaries of his empire and of his political and economic control of the regions.

The proportion of coin denominations in a hoard can inform us about the economic climate at the time it was buried. The composition of the hoard can enable us to establish a chronology for an archaeological site. The origins and find spot of the hoard may tell us about the trade power of certain cities whose coins journeyed vast distances before being buried. Hoards are incredibly important to our understanding of coins and wider history. In Classical Athens, the following were some common denominations and their relative value The bronze as was the basic unit of currency in the Roman Republic. NB: The weight of the metal could change. Ca. 140 BCE the relative value of the denarius and as was retariffed. Before that time, an as was 1/10 of a denarius. Afterwards, an as was 1/16. Even the metal used could change - the sestertius began as a silver coin, but became bronze in the Principate!

These were the most common denominations towards the end of the Republic and the beginning of the Principate: It's all well and good to know the various denominations of Roman Republican coins, but what was their value?

Our sources provide some hints of what could be purchased with your sestertii.

Coins often carry their own abbreviations - especially Roman ones of the imperial period. In Republican Rome, coin legends were often simple. The following list compiles some standard titles and abbreviations as they appear on Republican coinage.

An introduction to the office of moneyer Part of our exhibition on the coins of Caesar discusses this important office of the Roman Republic.