Publications of the Centre

Publications of the Centre

Under the imprints of the Ancient History Documentary Research Centre and the Australian Centre for Egyptology, the ACRC publishes a number of monograph series and a refereed journal.

The Centre collaborates with number of publishers (in particular Brepols [Turnhout, Belgium] and Oxbow [Oxford]) to provide fora for the publication of work by Centre members and postgraduates, as well as other researchers.

The publications of the Centre are:

The Australian Centre for Egyptology Reports publishes the results of ongoing excavations in Egypt by ACRC members.

The series Australian Centre for Egyptology: Studies publishes studies on ancient Egyptian history by members of the ACRC and other scholars.

Bulletin of the Australian Centre for Egyptology (BACE)

The Bulletin of the Australian Centre for Egyptology (BACE) is an annual refereed journal which publishes reports on excavations in Egypt and articles by Australian and international researchers.

The most recent volume is 24 (2013).
- Bon Appetit! Bread and Reed in the Funerary Repast Imagery of the Old and Middle Kingdom  by Andrea Kahilbacher (p. 7)
- Ptah-Sokar-Osiris Statuettes from the Mallawi Museum  by Heba Mahran (p. 21)
- Asiatics and Abydos: from the Twelfth Dynasty to the early Second Intermediate Period  by Anna-Latifa Mourad (p. 31)
- Egyptology and the Study of Art History   by Maya Muller (p. 59)
- Egypt in Late Antiquity: the evidence from Ammianus Marcellinus     By Alanna Nobbs (p.  81)
- Dictation revisited: The Admonitions of Ipuwer 9.14-10.2, 13.4 and 14.1-4    by Marina Sokolova (p. 89)
- The Egyptianisation of the Pan-Grave Culture: a new look at an old idea    by Aaron de Souza (p. 109)
- Chronological Considerations: fragments from the Tomp of Hetepet at Giza   By Alexandra Woods and Joyce Swinton (p. 127)

Copies of the Bulletin of the Australian Centre for Egyptology can be ordered through Oxbow Books, Park End Place, Oxford, OX1 1HN, UK. Email: oxbow@oxbowbooks.com

The Corpus Fontium Manichaeorum (Corpus of sources of the Manichaeans) Project is a major international research and publication project sponsored by UNESCO under the aegis of the Integrated Study of the Silk Road. It is a project of the Union of International Academies (Union Académique Internationale UAI) and its sponsoring academy is the Australian Academy of the Humanities. It is also co-sponsored by the British Academy (1990-) and has received major funding from the Australian Research Council, the Arts and Humanities Research Council (UK) and the Chiang Ching Kuo Foundation for International Academic Exchange (Taiwan, ROC) as well as minor funding from the Royal Swedish Academy of History and Letters (1990-91), the Leverhulme Trust (UK, 1990-93), Society of Antiquaries (UK, 1990-94) and the Seven Pillars of Wisdom Trust (UK, 1990-91) in addition to grants from research foundations in Germany and Denmark. The Corpus is published by Brepols of Turnhout (Belgium). The project is also one of the main avenues of publication for the International Association of Manichaean Studies (IAMS).

This series examines the civilisations along the Silk Road from Europe to East Asia and their characteristic archaeological, artistic, historical, linguistic, numismatic, philosophical and religious aspects. The exchanges that arose along the Silk Road produced intercultural outcomes that go beyond mere syncretism since they generated phenomena that integrated art, religion and philosophy at a deep level. A number of these volumes have been authored by ACRC researchers and produced in the Centre.

Recent Volumes produced in the ACRC

Copies of volumes published in the series Silk Road Studies may be obtained directly through Brepols publishers as well as from other retailers.

Copies of volumes published in the series Studia Antiqua Australiensia may be obtained directly through Brepols publishers as well as from other retailers.

New Documents Illustrating Early Christianity, produced by the Ancient History Documentary Research Centre within the ACRC, reviews and reproduces samples of Greek papyri and inscriptions which were first published or reissued in a designated year or years. Documents are selected to illustrate various aspects of life and language in the Graeco-Roman world.

Text and translation are printed facing each other on the page. Full indices (Subject Index; Index of Greek, Hebrew and Latin Words; Index of Greek, Roman and Patristic Writers; Papyrological and Epigraphical References; Biblical and Rabbinic References) are also provided. Volume 5 contains linguistic essays and a cumulative index for the first five volumes.

Of the volumes of New Documents reviewers have said: 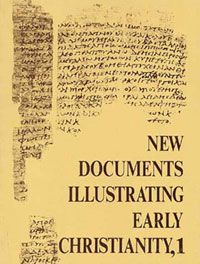 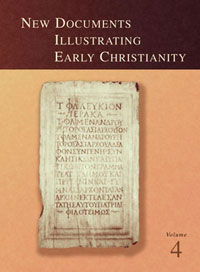 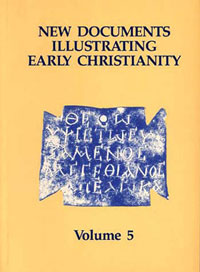 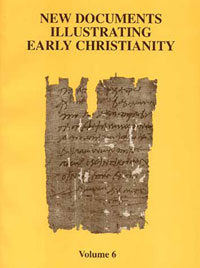 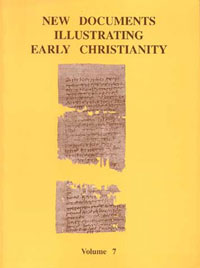 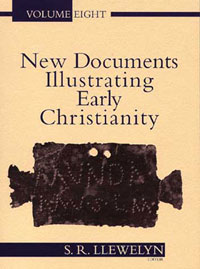 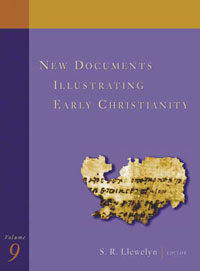