The Evolution of Limbs from Fins

Lungfish genes reveal a genetic framework for the evolution of limbs from fins.

The Australian lungfish is the closest living fish relative of four-limbed vertebrates (tetrapods). A team including Macquarie University’s Rolf Ericsson and Jean M. P. Joss. has now identified a gene expression region that is similar to the regions that control development of wrists or fingers in tetrapods. Their results have been published in Science Advances. 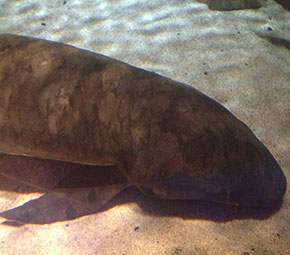 This uncannily limb-like structure, and the gene that cues its development, existed before tetrapods evolved, which points to a long-missing piece of the fin-to-limb evolutionary puzzle. The evolution of hands as we know them has remained mysterious. Some scientists argue that that digits developed after the evolutionary loss of fins. Others suggest that the form of limbs changed following the emergence of new Hox genes, which help map out a developing embryo’s body plan and ensure that structures form in the correct places.

Sarcopterygians, ancient fish with structures in their fins that are positioned similarly to elements of vertebrate limbs, could provide a way to test these hypotheses, but unfortunately many inhabit inaccessible areas of the ocean. African and South American lungfishes could also be studied, their reduced fins make them a less viable model. That left Australian lungfishes as the only viable sarcopterygian fish model to study the emergence of hand- and digit-related genes.

To gain insights into the genetic roots of the “fin-to-limb transition,” lead author Joost Woltering, from Universität Konstanz in Germany, and his colleagues analysed gene expression patterns in the Australian lungfish. The researchers assembled a lungfish embryonic RNA sequencing transcriptome from embryonic pectoral fin tissue and used whole-mount hybridization to identify “hand” and “digit” domains. They found that hoxa13 gene expression defines the same region of the skeleton in developing lungfish fins, just as it does in developing tetropod limbs, laying out the blueprint for a wrist- and finger-like region in the fish’s skeleton. The authors say these findings provide a genetic framework for understanding how the evolutionary transition from fish fins to tetrapod limbs came about.