Study: 'We are living in a sea of microplastics'

The first Australian study to measure microplastics inside homes has found significant levels of tiny but potentially toxic microplastic dust particles in every single house that participated in the research. Breathing in: Vacuuming is key to minimising microplastic dust particles which can lodge in your lungs, where they are not going to biodegrade, says Professor Taylor.

Most dust-born microplastic particles are near invisible fibres, smaller than human hairs, that accumulate on our floors and other surfaces of the home, and which we breathe in without noticing.

We spend most of our lives indoors, so that’s where we have our greatest risk of environmental contamination.

“We found the highest concentrations of microplastic fibres came from houses where the main floor covering was carpet, and from homes where floors were vacuumed less often,” says environmental science PhD candidate Neda Sharifi Soltani, lead researcher on the study.

“We spend most of our lives indoors, so that’s where we have our greatest risk of environmental contamination,” says Professor Mark Taylor, who is a Professor of Environmental Science and Human Health at Macquarie University and a co-author of the work with Sharifi Soltani and Dr Scott Wilson.

What are the health risks?

“Some of these fibres contain petrochemical based polymers considered to be toxic, and also have other contaminants attached to them, like hydrocarbons, polychlorinated biphenyls or PCBs, bacteria and microbes and trace metals such as copper, lead and manganese,” says Taylor. Greater exposure: Risks from household microplastics are more concerning for young children, who typically spend a lot of time on the floor, says Professor Taylor.

“When these microplastics lodge in your lungs, they're not going to biodegrade, and if you swallow them, some might pass out but some of these artificial particles can stay in your body and accumulate."

Both polyvinyl and polyacrylic microplastic fibres were found in the dust in this study, materials which the European Union’s hazardous materials classification has linked with human cancer and gene mutation.

Taylor says that while there is no direct evidence of harm to humans, we don’t know what the safe level of exposure to these chemicals is.

This study demonstrates it is an inescapable reality that we are living in a sea of microplastics from which there is no escape.

The more that these substances build up in our bodies, the greater our exposure is and so the risk inevitably increases, he says.

“High levels of microplastic dust in your home could increase your exposure to carcinogenic and other harmful substances,” he says.

Taylor says that multiple studies have shown there is no safe level or threshold of exposure even to low concentrations of toxic chemicals.

“Long-term research has always led to us dropping the levels of ‘safe’ or acceptable exposure to pollutants,” Taylor says, citing examples like mercury, lead and pesticides.

“Microplastics studies and their adverse effects on natural and human environments are relatively recent, and we don’t have the data to assess long-term harm.”

Taylor says that risks from household microplastics are more concerning for young children, who typically spend a lot of time on the floor and frequently put objects in their mouths.

“Children are also going to have greater exposure to these particles compared to their parents,” he says, noting that children inhale a greater proportion of microplastics by bodyweight compared to adults.

Where does microplastic dust come from?

The study measured particles in dust and found they were made up of common household plastics, such as polyethylene, polyester and polyethylene terephthalate (PET). All around us: Sources of plastic in a typical house are numerous, from food wrapping and containers to clothing and toothbrushes, says Professor Taylor.

“Artificial petrochemical-based materials are used everywhere in the indoor environment, they are in our carpets, in furnishings, in our clothing, and over time, polymer-based materials will degrade and form microplastics,” says Taylor.

Taylor says that while some microplastics could be blown or tracked indoors, there’s so many sources of plastic in a typical house that most microplastics in the house have probably degraded in-situ.

He cites sources of plastic including food wrapping, food containers, toothbrushes and clothing.

“Microplastics in dust can float around in the air, they are deposited on your food and kitchen utensils causing you to inadvertently consume and inhale them,” he says.

“It is an inescapable reality that we are living in a sea of microplastics from which there is no escape and the true human health consequences have yet to be identified."

The dust was collected via Macquarie’s DustSafe citizen science program, with people from 32 different homes across 22 different local government areas in greater Sydney volunteering to keep specially prepared glass dishes in their homes during the study period.

Volunteers answered a survey about their homes and the people who lived there, including the number of children and adults, floor surfaces and frequency of vacuuming.

Microplastics in dust can float around in the air, they are deposited on your food and kitchen utensils causing you to consume and inhale them.

The dust samples were examined using different microscopes and Infra-red spectroscopy to identify the microplastics that had accumulated in household dust.

“There have only been a small number of similar studies around the world,” says Sharifi Soltani.

While microplastic accumulation levels found in this study were “at the lower end” of international results, she warns that the small sample size and the different research methods used worldwide make it difficult to draw firm conclusions at this time.

How to minimise risk 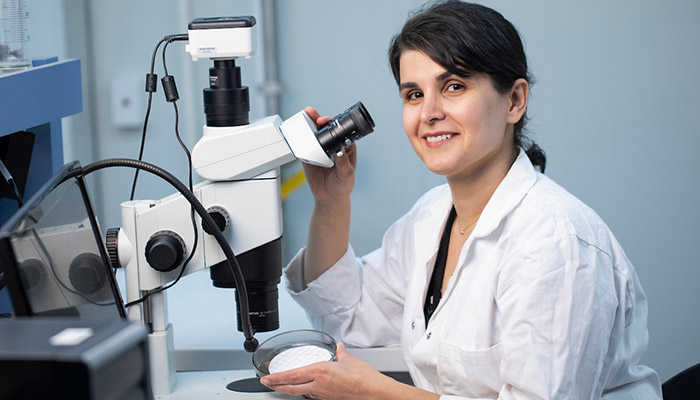 Early findings: Researcher Neda Sharifi-Soltani says there have only been a small number of similar studies into microplastics around the world. Photo credit: Michael Amendolia

But even timber floors can be a source of microplastics, she says. “Houses with wooden floors had the highest concentration of polyvinyl fibres, which is one of the most carcinogenic substances in the microplastics.”

While tile or stone floors may be less harmful, she says that vacuuming regularly seems to be the most consistent way to keep particle levels low.

“The actual risk to human health is unclear, but we know that microplastics are pervasive across our homes, environment, food and water and even our air,” says Taylor.

“More research is essential to establish what levels of exposure, if any, are safe.”