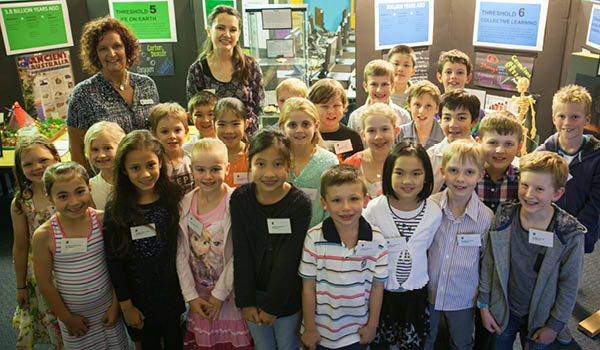 Our Little Big Historians hosted a special Big History Museum at Putney Public School.  Project Coordinator Elle Hrobat visited the pop-up Museum to meet our next generation of curators and historians. Check out photos from the night.

The night kicked off with students greeting us at the door, marking our attendance, and showing us the way into their ornate Big History Museum which, by day, goes by its regular name: the library. Proud parents took their seats in front of an orange ribbon ready to be cut signaling its opening night- a premier showcase not only for the students, but for Big History itself. Putney's principal Ms. Rhonda Russom began with a big thanks to the Big History Prime students and Ms. Colonna for their hard work in putting together such an elaborate display- the night even attracting the attention of the local paper Tracy said a few words in relation to how elated the Institute was in having a gem of a school such as Putney pioneering in Macquarie University's Big History Prime space.

"We couldn't have asked for a more forward thinking school and supportive principal," says Tracy.

Parents were particularly amazed that their students were actually the first in the world to pilot Macquarie University's Big History Prime Program.

Next on the agenda was the New Periodic Table song sung by a few brave volunteers from the Putney class. In case you were wondering, yes, the New Periodic Table song is the whole periodic table put to lively orchestral music. I was gob-smacked at the students' ability to memorize the whole table, not to mention their lung capacity!  Where only the brave tackled the likes of 'Berkelium', 'Californium' and 'Einsteinium', the rest of the students made a heavy comeback by the time 'Ununtrium' and 'Flerovium' came around.

After the ribbon ceremony, and the students were awarded their Big Historian certificates, the one night only pop-up Museum was officially declared open. The students acted as tour guides and station directors. It was very well curated. We were led through the Thresholds in small groups following the competent directions of the little professors. What truly stood out was the level of detail Ms. Colonna and the students put into the displays. Footsteps were laid out on the floor to guide you through the exhibit and they changed from stars to train tracks as you moved from the Big Bang through to the Modern Revolution. There were interactive quizzes and jigsaw puzzles to test your knowledge, and all kinds of fossils and objects from the past and present. There was even a Homo Erectus life-size cutout that you could get your picture taken with. You could see the students took great pride in owning their assigned Threshold station, but also their knowledge in it. Parents were ecstatic at how enthusiastic their children were about Big History, as their children wowed them with historical facts and big words not only at the event, but as I'm told, each night at the dinner table.

After such a successful night which exceeded expectation, I was excited to see the next generation of up and coming forward thinkers who recognize the issues they will face in the future. Big History is equipping them with the knowledge they need and they are quickly mastering it from a young age. We thank Ms. Colonna & Putney Public who are continually making this possible.