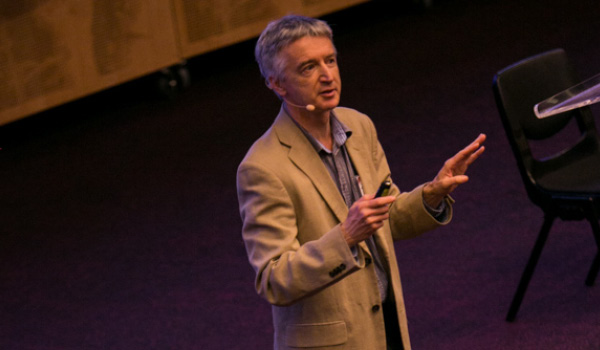 The Anthropocene Working Group of the International Commission on Stratigraphy recently released a report in Science magazine that states the Anthropocene is distinct from the Holocene. Can you tell us about the significance of this paper?

This paper provides a summary of the evidence of the Anthropocene as a geological time unit.  The focus here is not so much on time and process, but on the physical, chemical and biological signals made over Anthropocene time (although the precise extent of that time has yet to be determined) and by a variety of processes (in particular novel, human-driven processes) and imprinted upon sediments laid down over the past decades and centuries.

Thus, the emphasis is on the characteristics of Anthropocene strata and on whether a distinct Anthropocene stratal unit may be recognized and distinguished from the strata of the preceding Holocene.  The branch of stratigraphy involved here is called chronostratigraphy, or 'time-rock' in the vernacular, because it deals with and classifies a material unit - that can be hit with a hammer (or mostly in this case dug into with a spade) measured, sampled and so on. The unit here would be termed the Anthropocene Series.  It would be the material equivalent of the 'abstract' time unit of the Anthropocene Epoch (which belongs to the related branch of stratigraphy called geochronology).  To most stratigraphers this is an important distinction, because older strata are all the evidence we have about the past Earth and its past time units and so this 'material record' is the primary consideration.

The Science paper hence systematically outlines these various material stratal signals - of different types of human-made 'minerals' and 'rocks' (metals, plastics, concrete, fly ash and so on), of geochemical signals (global changes in carbon and nitrogen chemistry, persistent organic pollutants, radionuclide signatures and the like) and of biological changes of species invasions and extinctions.  It also compares recent trends in these signals with their trends in Holocene and earlier times to get a sense of scale of the geological perturbation associated with the Anthropocene.  The sum total of these suggests to us that the Anthropocene - best defined as beginning sometime in the mid-20th century, when many of these trends began, or intensified, or became global - is distinct from the Holocene.

What are the next steps to formally classify the Anthropocene as a new geological time unit?

We still have, on the Working Group, to formally decide (more precisely establish the balance of opinion among us, by vote) on the big questions of the Anthropocene - on whether it is justifiable as a unit, whether it should be an epoch-scale unit (which would imply that the Holocene has terminated), where its beginning should be placed, and whether it should be defined by a numerical date (in stratigraphic parlance a Global Standard Stratigraphic Age, or GSSA) or by a physical reference level in some stratal section (a Global Boundary Stratotype Section and Point, or GSSP, often commonly called a 'golden spike').

If the decision is to use a 'golden spike' as reference - which has become standard practice for units of the last half-billion years - then there is still much to work to do: to identify a series of the best 'candidate stratotypes' from around the world and to analyse within them as full a range of stratigraphic evidence as possible.  This has not been done before, and it will take significant time and cost significant money, neither of which we currently have.  That might, say, become next year's problem for us.

Why is it so important to determine whether the Anthropocene should be classified as a new geological time unit?

One might simply say that if there is a distinct geological phenomenon, it should have a name to be most easily used within a common language.  But of course it is more complicated than that.  The sum total of stratigraphic evidence used to characterize and perhaps to formally define (if it comes to that) the Anthropocene also represents the rapid and ongoing (and often accelerating) changes to our planet that will impact its habitability for humans - perhaps severely.

The concept also implies that human-driven change on its current scale is not temporary or ephemeral or easily reversed, but that its effects will persist over geological timescales. Because Anthropocene-related changes are ongoing and their ultimate scale will depend to a large extent upon decisions and actions over the next years and decades, it is small wonder that the Anthropocene has become something of a central concept in discussions of global change.

You've previously spoken about rats and their ability to successfully adapt and evolve in new environments. What do you think the future holds for our influential, loveable rodent friends?

In the emerging world of the Anthropocene, there are winners and losers among humans and non-humans alike.  The rats have emerged so far as winners (my cat and all its many kin around the world is another winner).  We are aware of the most charismatic of the losers - tigers, rhinoceri, orang-utans and so on - but of course there are many others (there are rather more losers then there are winners, in a world where the biosphere is degrading fast).

Since we have transferred those loveable, adaptable, social, intelligent rodents all around the world - where they have for the most part done very well for themselves - they will likely play a significant part in any future biology, and help give rise, by the normal processes of evolutionary adaptive radiation, to the new species of the far future.

Many millions of years ago, the early mammals (not too dissimilar to rats, at a glance at least) of immediately post-dinosaur times went on to evolve into lions, giraffes, elk, whales, cats - and humans. So the rats and other widely dispersed winners will likely evolve to fill the niches in the post mass-extinction world (assuming there is a mass extinction geologically soon, which on current trends seems rather more likely than not).

Many of these evolutionary experiments to come will be on islands - just as with Darwin's finches and tortoises on the Galapagos.  Though there will be losers here too, even among the rats.  Those that had the long-term misfortune to be transplanted on to low-lying island atolls will likely drown as rising sea level (again, seeming more likely than not) overwhelms them - there will not be time to evolve, here at least, into amphibious seal-rats.  But, of course, one imagines that among the last human-bearing ships to leave those atolls, there will be a few of the more determined and resource rodents too, looking to seek their future on new lands...

What do you think is the greatest challenge we face today?

What we have facing us seems to be a set of interlinked challenges (of pollution, climate, resources and not least simply the task of feeding our growing numbers) all of which fit one way or another into the emerging conditions of the Anthropocene.  I'm not sure about the biggest challenge here, but one constant here is for human communities (in practice divided and competitive if not outright mutually hostile) to work together for what one might regard as the common good.  The tragedy of the commons seems to have a little too much of the upper hand right now.

And what do you think the future holds for us?

I am even more at sea here than I was in the last question, given that I am a dyed-in-the-wool old-fashioned geologist who is accustomed to living very far in the past. There seem to be many potential futures, and whether one takes place rather than another might have as much to do with the interplay of accidents as with the weaving of human design.

Of late, I have been intrigued by the concept of the technosphere, as being developed by my colleague Peter Haff. This comprises the sum total of all of our technology, from toothbrushes and ballpoint pens to nuclear missiles and farm irrigation equipment, together with us humans as (currently) integral parts and our communication and societal structures representing the software.  Peter posits this as a new kind of Earth system of global reach, budded off from the biosphere, and one that allows 7-plus billion humans to (more or less) flourish on the planet.

The corollary is that those humans are now constrained to keep thi­­s new sphere - with its enormous material and energy demands - going, otherwise we would not survive in anything like our current numbers.  The technosphere has its own dynamics independent of those of its tiny moving parts and is evolving very fast (using the word 'evolution' sensu lato, of course) into quite new territory for this planet. It also has a number of teething problems as behooves any brand-new planetary system, including being very poor at recycling its waste products compared with the biosphere (which left to itself is excellent in this respect).

So being aware of the technosphere and of its demands and constraints and possibilities (bad ones as well as good ones) may be a good idea, and this may help efforts to nudge it (if such nudging is still possible) into patterns where it may interact rather better and rather more stably with its parent biosphere.  In such a pattern, it might just be rather gentler towards its human components, too...