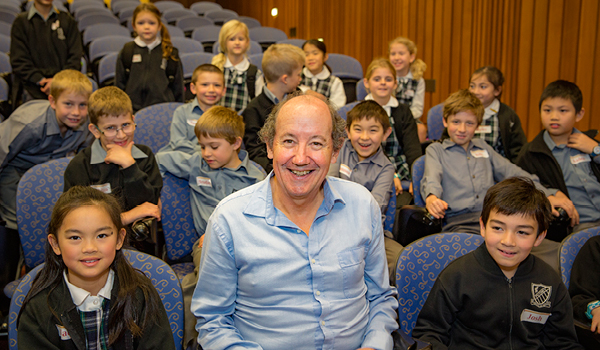 The grounds of Macquarie University were graced with tiny feet when 24 students from Putney Public School explored the campus earlier this year. Elle Hrobat, Project Coordinator at the Big History Institute, accompanied the class on their first ever Big History excursion.

Led by their enthusiastic Big History teacher Ms. Colonna, the students are undertaking the first Big History course for primary schools students, Macquarie University's Big History Prime. The pilot program  is run as an enrichment course at Putney for a class of inquisitive 7 to 9 year olds.

In the morning, the students were given their very own Big History lecture by Big History Institute Director and Macquarie University Professor David Christian. The students were particularly pleased with his appearance in the flesh, as they had only ever witnessed him on their computer screens in the classroom. When asked how to prepare, Professor Christian was told today's assembly would be most disappointed if dinosaurs were not included in his talk.  Professor Christian chatted about the history of the universe from the Big Bang to now, and made sure to give dinosaurs a special mention to the delight of the students.

Next on the agenda was a visit to Macquarie's Biological Sciences Museum led by curator, Elizabeth Eyre.  Exploring Threshold 5: Life on Earth the students were able to browse the displays of mounted reptiles, mammals, skeletons and even look at the live Lungfish in its tank.  The highlight of this trip was clearly the detour past 'Frank' the 6 foot standing Kodiak bear in the corridor.  Students learnt that Frank was donated to Macquarie from Taronga Zoo in 1978, and were relieved to know that he and the rest of the animals in the Museum died of natural causes.

The students then visited the Ancient Cultures Museum to relive Threshold 7: Agriculture & Civilization. Education Officer, Philippa Medcalf, put on her archaeological safari hat and passed around ancient artefacts and the students guessed the purpose of each. The class successfully identified ancient jacks and a clay pot used for storing milk, both key features of everyday life in ancient times. One particular artefact, a long stick with a sponge at the end of it gathered the most attention:  the ancient Roman toilet brush. Thankfully a replica! The students learnt about the use of the 'sponge stick' and how the rich Romans often made their slaves use it on them.  Amongst the giggles of disgust and delight, the children were given a tactile and everyday insight into Ancient Civilizations.

The success of the day was testimony to the enthusiasm of its teachers and students, which signals the true potential of Macquarie University's Big History Prime.  Speaking to Professor Christian after the event, his excitement was clear, "Obviously a wonderful school, but for me it was just proof that kids this age can deal in surprisingly sophisticated ways with the big ideas of Big History.  I thought the kids and teachers were wonderful and they really are pioneering Big History at the primary level."

Read a Putney student review from the day

If you would like to know more about Macquarie University's Big History Prime, or becoming a Big History Prime Pilot School, please contact our Project Coordinator, Elle Hrobat at  elle.hrobat@mq.edu.au

Be a part of our vast knowledge community! Become a member of the Big History Institute. Membership is free.