Fibrescopic examination of the larynx and velum

The movies linked to on this page were originally filmed on a video tape by John Clark in 1979 at Reading University in England. The movies were transferred to digital format by the Centre for Flexible Learning at Macquarie University and were edited and digitally processed by Robert Mannell. The text accompanying these movies is based loosely on John Clark's narration on the original video tape with additional text and comments by Robert Mannell.

All of the movies attached to this page are quite large. The majority are between 1 and 5 Mbytes. The exception is the introductory movie ("Fibrescopic Examination of the Larynx") which explains the technology and the technique of nasoendoscopy using a fibrescope. That movie is very large (nearly 50 Mbytes) and will take a while to download via a fast broadband connection.

Structures of the pharynx and the larynx

Back of the tongue and the epiglottis

In this clip "...you can now see my larynx from above and the whitish looking object that keeps moving into the picture from the bottom is the back of the tongue and the epiglottis as I speak. And as I swallow you lose the picture all together. Its useful to swallow from time to time to keep the tip of the fibrescope clean and free mucous or from fogging." 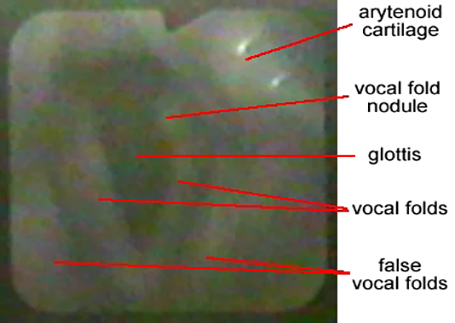 Figure 1: This image has been taken from the movie and has been annotated to help you identify the main structures more easily. Many of the clips suffer from this poor level of contrast as a consequence of the relatively low light intensity illuminating the structures. Only very close structures (such as the back of the tongue when it comes into view) are well lit. 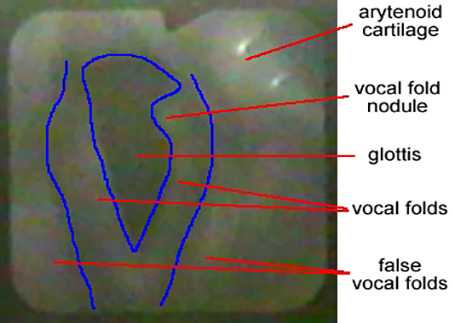 Figure 2: Same as figure 1, but with lines added to show the edges of the vocal folds and false vocal folds in this particular shot.

"If you look closely at the right hand vocal fold you'll see I have a small nodule. At least, I like to tell myself it’s small."

"I shall be using /i:/ vowels almost exclusively in this demonstration in order to keep to the body of the tongue out of the line of view from the position at which the fibrescope is placed."

In this clip, we will "look at ordinary pitch control by varying length and tension of the vocal folds using the cricothyroid muscle. The vocal folds gradually get longer as the pitch rises and become quite short for low pitch."

This clip examines modal phonation during the production of an /i:/ vowel.

In the following three clips, breathy phonation, creaky phonation and whisper are all contrasted with normal phonation.

In this clip we examine "...breathy phonation in which the vocal folds are not quite as tightly closed as they are for normal phonation. There is a chink at the arytenoid end of the glottis through which air can escape, as well as escaping along the length of the membranous vocal folds."

In this clip we examine "...creaky voice in which the vocal folds are in fact quite slack and very short and thick."

In this clip we examine whisper. "You should be able to see a small opening at the arytenoid end of the vocal folds which allows turbulent air to be forced through that narrow aperture and produce a sound source for whisper."

"We shall look now at glottal and supraglottal activity and their co-ordination."

In this clip we will examine vocal fold behaviour during the production of voiced stops. In "voiced stops you won’t see vocal fold abduction, but you will see a slight lowering of the larynx to increase the pharyngeal volume to maintain the trans-glottal pressure necessary to keep the phonation going, during the occlusion phase of the voiceless stop. ... [During a voiced stop occlusion] there is a gradual rise in pressure in the cavity above the larynx and eventually a point is reached where it is not possible for phonation to be sustained because there is no significant difference in pressure above and below the larynx. One means of preserving some pressure difference during the occlusion is for the larynx to be lowered." During the slower articulations of these stops "...you'll notice that I held the occlusion so long that even with the lowering of the larynx there was still not enough differential pressure across the vocal folds to ensure continuance of phonation."

In this clip, we will "...look at voiceless fricatives. Again, you will see the vocal folds abduct during the frication phase."

In this clip, we "look at voiced fricatives. In the compression of the vocal folds during the frication phase [there is] perhaps a little more air coming out [than occurs during normal phonation] to help sustain the frication on the voicing."

In this clip, we will look "...at a fricative plus stop cluster /i:sti:/ where again you will see the glottal aperture widely opened during the fricative and stop phase and then rapidly closed for the following vowel. ... There are one or two complex things happening here. First of all, there isn't as nearly as much aspiration on the /t/ as there would be if it was initially produced as a single, non-clustered consonant. Most of the airflow occurs during the fricative."

In this clip, we look at "another stop plus liquid consonant, /i:tri:/. ... You can see that the aperture of the vocal folds remain quite wide even well into the /r/ consonant which [is realised as] a voiceless fricative. This is regarded by some as being an affrication."

In this clip, we have "moved the fibrescope back slightly and take a look at the activity of the velum. The fibrescope is positioned in the posterior part of the nasal cavity and you can see, as I speak, the velum rising."

In this clip, we look at velum control during the production of oral and nasal stops. "If I make a voiceless stop, for example, as in /pa:/ you can see the back of the pharyngeal wall being closed off by the velum [to permit the build up of] ...inter-oral pressure. If I make a nasal stop you'll see the velum remains lowered. You may see it move slightly but that's all."

In this clip, we examine velum control during high (/i:, o:, u:/) and low vowels /a:/. "You'll see with the low vowel, there was virtually no sign of the velum at all. Whereas, for the high vowels there were appears to be almost complete closure, so that there is little or no possibility of air flow through the nasal tract during those high vowels. This is of course at least in part due to well known effect of mechanical coupling between the velum and the tongue via the palatoglossus muscle."

In this clip, we examine "the effects of coarticulation which occur when we articulate the word 'pat', as opposed to 'man'. Now you will notice that in 'pat' the velum almost entirely obscures our view, whilst during 'man' it remains almost entirely lowered so that the vowel in 'man' has got a great deal more nasal air flow than the vowel in 'pat'."

In this clip, we examine velum control during the articulation of a denasal vowel, a normal vowel, and a nasalised vowel. In each case the vowel is /a:/. Compare these vowels with the vowels produced between oral and nasal stops (see above).

"That concludes the demonstration of the larynx and the velum viewed by means of the fibrescope. As you may see from this brief demonstration, it is a device which has great potential both for phonetic research into the mechanisms of laryngeal vibration and of laryngeal control during supraglottal articulation and into the movement of the velum [during speech, as well as] ... for more practical things such as the investigation of voice pathologies."